It has been a long-standing tradition that when you smoke up with friends, you eat munchies and watch movies. The enjoyable experience of weed gets heightened with movies.

But, what movies should you watch when you’re high? Comedies? Drama? Horror or Tragedy? There’s so much to choose from!

In this post, we’re going to tell you about the top five movies to watch when you’re high.

Our favourite movies to watch when high

Getting high is a fun experience. People love to be high. There are many ways to elevate your high. And watching movies is one of them.

Through our research of anecdotes and ratings, we bring to you our list of Top Five Movies To Watch When You’re High.

The classic comedy, Airplanes! is a laughter riot. Full of scenes of juvenile buffoonery, Aeroplanes! has all the elements we look for in a weed comedy. The scenes, one after the other deliver a good dose of humour to the viewers.

The storyline which is fantastical will keep anyone who’s highly engaged for a long time. The twists and turns and the funny fails will make you cry happy tears. Perfectly pairing up with some sour patches, this movie should be on your to-be-watched for the next smoke sesh! 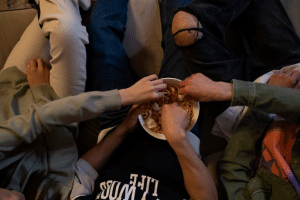 Placed in the 10th Century, this hilarious search for the Holy Grail goes through many hysterical twists and turns. The comedic hunt is made for a stoner’s entertainment. This cult classic is based on King Arthur and his Knights of the Round Table.

They go on a funny search for the Holy Grail, and on the way, they stumble upon many obstacles. Each obstacle brings with it its hilarious dose of laughter that will leave you split. Make sure to grab some tissues, because you sure will need to wipe your laughter tears!

Set in the fading splendour of a ridiculous luxury hotel in the fictitious Zubrowka, a ludicrous pre-war nation in central Europe, the movie is exceptionally detailed and hilarious work.

Anyone, high or sober can truly appreciate how Anderson has smothered every scene of his film with intricate and exquisite details while caring the same for comedy. It keeps the audience overwhelmed with its cinematic brilliance and immersed in its entertaining contemporary American dialogues.

This movie will get you rolling your eyes, shaking your head, and smiling at the same time.

Shaun is a salesman in his 30s with a very boring and uneventful life. When he’s not working at the hemp store, he shares a little flat outside of London with his unkempt best friend, Ed. His life revolves around 2-3 people and mostly the pub.

His girlfriend, Liz, who fervently wants Shaun to mature and become a man, is the only unpredictability in his life. This routine life of his abruptly changes when he has to deal with a large group of zombies all by himself.

The mix of this scruffy zombie comedy and the dread it produces is unstoppable. You will be left in a frenzy of laughter while watching some groovy action!

This is a slow and silent movie that will get you thinking deeply about humankind and its evolution. Watching this subliminal movie while you’re high will have you ogle at human capabilities and technology and might even leave you with existential questions.

Nevertheless, this is an intellectually stimulating movie that will leave you in awe of its scientific transcendence. You will be left contemplating time and space; the music and the sound effects in the movie make the process seem even more grandeur.

So get on board, this high will actually take you to space!

Spirited Away is an animated movie about a small ten years old girl. Her name is Chihiro. It is a story of her adventures as she forays into a world dominated by the heavenly. This world of spirits and gods fascinates her and leads her to one too many exciting endeavours.

There is a witch in this story whose name is Yubaba. Yubaba is cruel and turns her parents into pigs. This results in Chihiro being forced to work at a bathhouse. Pick your pack of gummies and get ready for an exciting ride into the world of Gods.

Pulp Fiction is a cult classic Tarantino movie. It contains all the elements that people usually identify Tarantino with. The exhilarating pace of the move is perfect for an adrenaline rush for anyone who’s high.

The two hitmen in the movie are like philosophers on cocaine and a cabinet full of bodies. Their lives are directed by their boss. The movie is filled with black humour and post-modern influences. The movie defined pop culture in the 90s and still in the 2020s has an impact on it.

This is a subjective question that can’t be answered with a yes or no. Depending on whether you like horror or not, who you’re with, and even what you’ve eaten, you can think of a bad trip. We recommend that you do not watch horror if you generally do not like it.

Generally, comedy movies are fun to watch when you’re high.