Can Weed Make You Hornier? 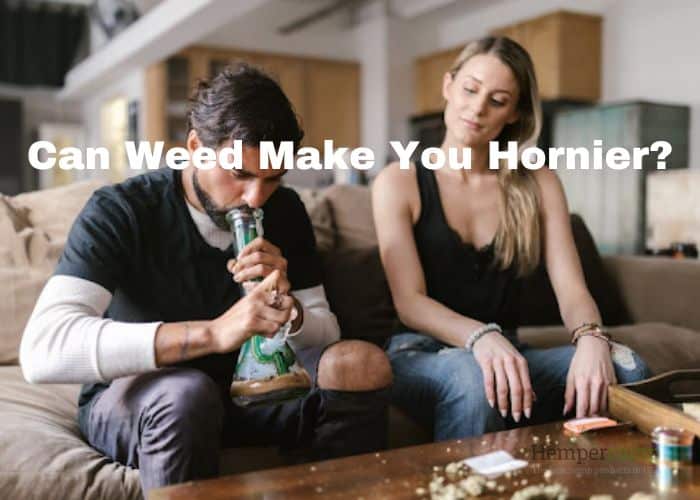 Debated by many, and discussed by all, but yet, everyone is confused about this question. Can weed make you hornier? The answer is yes, it makes sex better.

Most of these questions are not asked because they come from a place of discomfort. It is only after the legalization of weed in 2018 that people have started discussing it more openly. The correlation with sex is still an uncomfortable advance for many/

Therefore, we are here to bridge the information gap and answer some of the most curious, pressing questions that you have about the interaction between weed and sex. So let’s get started and find out if weed makes you hornier.

For now, you can rely on the fact that yes Weed does make sex better and people in various studies have confirmed this. Even anecdotal evidence gathered by us confirms these findings.

How Does Weed Affect Our Bodies?

Weed’s main psychoactive component is THC. THC is the active ingredient in Cannabis that gives people the feeling of getting high. THC binds with the cannabinoid receptors in our brains and throughout our nervous systems.

This generally results in our senses getting heightened. Therefore, stoners are usually heard saying that food tastes better when they are high, smells are more intense, and listening to music is a ‘trippy’ experience.

It is due to the alteration of the senses this happens. But what happens to sex?

How Does Weed Affect Sex?

As we already stated, our senses get heightened after consuming cannabis. The simple analysis of this fact tells us that when you’re high and you’re stimulated either physically or mentally with sexual thoughts, the feeling of ‘horniness’ is just more intense.

What it can do, is make your sexual experience mind-blowing and help you derive more pleasure from it. You would be more willing to engage in a sexual encounter, not on account of you being ‘hungry’ for sex but that you like it more.

You will still be in your sense as to who you’re having sex with, you won’t take sexual risks as you might take when you’re drunk. The major difference that comes in when you’re high is that the whole experience is much more intense and enjoyable.

What Do Studies Tell Us About Weed and Sex?

In the past, there have been many attempts that have been made to understand the mysterious relationship between weed and sex. These attempts have been in the form of scientific studies and they have yielded some very interesting results.

A study conducted by St. Louis University, published in 2019 and titled “The Relationship between Marijuana Use Prior to Sex and Sexual Function in Women” revealed that a majority of women believe that weed improves their sexual experiences.

In this study around 400 women participated, out of which 40% agreed to have used weed before having sex. These substantial numbers confirm our observations and assertions about the connection between weed and sex.

Similarly according to this study men report that they feel that their sexual performance on weed and off weed is different with the former being better than the latter. This again might have to relate to the heightened sensitivity and sense notion as agreed by Carl Sagan in 1971.

There is not enough research available on weed and sex given that it is/was so highly regulated. But, now with the sun finally rising on the legalization of weed, we are hopeful that science is able to answer more of our questions.

For now, if reliance is placed on anecdotal experience, then definitely weed makes you hornier.

After How Much Time Will Weed Make You Hornier?

Weed makes you hornier once the onset of THC effects sets in. This usually takes about 30 minutes on average, but it depends on the method of administration. If you’re smoking up through a bong then it will take you at max 10 minutes. If you’re having edibles then you’re in for the long run.

Therefore, depending on how you have consumed the weed, you can expect the effects to set in about 30 to 45 minutes. You will know the effects have set in when you feel that physical or mental stimulation makes you hornier than usual.

This might be a good time to spend with your partner and share some intimate moments with them. You could plan this moment beforehand and have everything necessary already ready for the moment.