Can You Donate Plasma if You Smoke Weed? Yes, you can donate plasma if you smoke weed. However, it would be wise to avoid marijuana immediately before a blood donation. Turning up in an inebriated state is against the rules and vitiates legal consent for blood extraction.

Why is it important to donate blood?

Millions of people across the world owe their life to blood donors. It is estimated that 4.5 million Americans require blood each year. Patients fighting life-threatening diseases or undergoing high-risk surgeries require plasma donations and a single blood donation can save up to three lives. The importance of blood donations cannot be overstated.

Fortunately, using weed does not have a bearing on your eligibility to donate blood.

Who can donate blood?

The American Red Cross puts down the list of general qualifications if you want to donate blood:

According to the US Food and Drug Administration, the only grounds for disqualification related to intoxicants are:

The specific prohibition against injectable drugs is due to the higher risk of coming in contact with contaminated injections. Re-used injections carry the risk of spreading HIV and Hepatitis.

Do blood banks test for THC?

The Food and Drug Administration does not require blood banks to test for THC. The official position of the American Red Cross is clear as it clearly states that the use of marijuana is not a disqualifying factor.

However, the American Red Cross makes one exception. It disqualifies individuals who have consumed synthetic marijuana – popularly known as spice or k2. This rule is grounded in the fact that some varieties of k2 contain anticoagulants that could contaminate plasma. It is extremely important to note that this is not a uniform rule and is usually left to the discretion of the local blood clinic. There are no FDA guidelines regarding synthetic marijuana.

Disqualification also comes into play in the case of Marinol – a medicine that has been approved by the FDA and contains synthetic THC. You would not be able to donate blood if you were taking Marinol for a medical condition, such as nausea from chemotherapy or loss of appetite from HIV infection.

Does that mean you can donate blood while under influence? 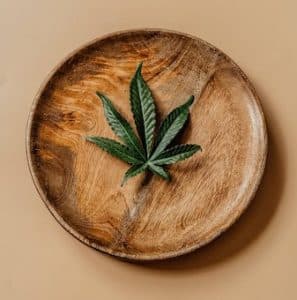 Certainly not. While agencies and clinics are usually fine with your system containing medical or recreational marijuana, they have clear rules against being under the influence of any substance at the time of the donation. Thus, the presence of THC in your blood may not disqualify you but any visible signs of intoxication or influence might. It would be a wise idea to avoid consuming weed immediately before the donation.

There is also a legal dimension here. An individual must make the decision to donate his blood without undue influence. In the eyes of law, free will is vitiated when the individual’s capacity to reason is significantly affected by an intoxicating substance. Therefore, if you turn up in a visibly intoxicated state, your appointment will most likely be deferred.

Does your method of consumption matter?

While the presence of THC in your system is irrelevant to your eligibility as a donor, it is still important to understand how long THC stays in your system. An edible high usually has residual effects for up to 12 hours whereas a smoking high makes have residual effects for up to 6 hours. Either way, it would be safest to not use cannabis in the 48 hours leading up to the donation.

What can you do if you do not meet the criteria for eligibility?

Cannot take out the time to volunteer? You can still make a significant impact by making a financial contribution to a domestic or global organization in the field.

In 2020, the American Red Cross issued an article answering the most commonly asked questions about marijuana use and donations.

Some of the key points are as follows:

An individual is not disqualified from donating blood if they use cannabis. However, if you are visibly under influence of a substance – your slot may be deferred. Blood samples collected for the sake of donations are never tested for THC. Although, in rare cases, they may be tested for synthetic THC. Most importantly, the use of cannabis should never make you doubt your decision to donate blood.