Can You Smoke Weed Stems? Can you really smoke weed stems? Yes, you can! But should you? Read along to find out more.

The negligible amount of THC in marijuana stems is barely worth smoking, and it can be highly unpleasant for your lungs and insides. Marijuana stems carry the least amount of THC content in them, not offering the high you are looking for. The stems are covered in Kief due to the flowers brushing against them. The Kief is what gives these stems their small amounts of THC content. Quite often, the THC content due to this is about 1%, give or take.

Burning and smoking weed stems releases toxins and carcinogens (agents that cause cancer). While smoking is generally the way to go, smoking a weed stem is not how one should do it. The process of smoking a weed stem will harm your lungs and can also raise the risk of developing immediate lung and heart diseases. Moreover, why would you want to smoke a substance that tastes and feels like wood?

Is it safe to smoke weed stems?

Although the stems have some trace amounts of THC, it is not enough to produce a substantial-high that someone using may be looking for. There are several side effects that one should keep in mind.

A few side-effects of smoking weed stems are:

All this said however, it is highly possible to smoke the stems. They are combustible. There are, however, no benefits to it. The marijuana stems are highly fibrous in nature. They are more fibrous than the flower itself. The marijuana stems, therefore, burn much faster and release smoke at a far higher rate, with more heat. Inhaling this kind of smoke can result in facing any of the effects mentioned above, or can even cause something new that hasn’t been observed as yet.

It is always better for you to use these stems for a different purpose.

What to do with weed stems?

Although they are not worth smoking, marijuana stems are not completely useless. The seeds and stalks that are still present in the plant may very well be useful. There are other uses for marijuana stems. One can use them in the production of, for example, edibles, hemp wicks, or tinctures. You do not need to just plainly dispose of them.

How to make edibles with weed stems?

Stems can most definitely be used to make edibles. The marijuana stems can be used to make Cannabutter. This is a type of butter alternative that is used to make other edibles. It is used in the baking process. Cannabutter needs to be made in a way where the potency is low, as there are other ingredients that go into making the edibles as well. Using marijuana stems to make this Cannabutter can help that purpose, as it has very little to no THC content in it. The potency will be low and can serve as a wonderful alternative to whatever was being used before. 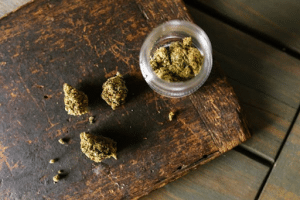 In order to make Cannabutter, you will need just three ingredients. Either butter or coconut oil, Hot water, and marijuana stem that have been finely ground and powdered.

Once this butter has been prepared, you can use it for literally any cannabis product. You may very well want to increase the use of the marijuana stem as and how you require the potency in the butter to be. Note that it does indeed contain only trace amounts of THC and CBD.

In the end, there may very well be many side effects to smoking marijuana stems. These may be adverse in nature, and you are definitely unlikely to experience any sort of psychoactive feeling and/or effect. The marijuana stems also taste bad.