The sweet and savory smells of berry and blue cheese combine to create a creamy, unique flavor reminiscent of the original cheese. The heavy indica effects will help you feel relaxed at the end of the day and can provide relief for muscle spasms, pain, and stress.

What is Blue Cannabis Cheese Strain?

Blue Cheese Cannabis strain is characterized as a hybrid that is high on indica. The composition ratio of the strain lies somewhere around 80% indica and 20% sativa. This popular strain is a result of cross-breeding between UK Cheese (hybrid) and Blueberry parent plants (indica). The outcome is a robust strain with plenty of THC content and a distinct cheesy aroma accompanied by a fruity flavor.

How Does Blue Cheese Cannabis Strain Feel in Terms of Aroma and Flavor?

The Blue Cheese strain’s main distinguishing feature is its unusual aroma, which is curiously evocative of genuine cheese. Unlike the fragrance, Blue Cheese has a sweeter flavor, with the majority of the zestiness or citrus tone escaping during the ignition process. The inhalation is usually sugared and delightful, while the exhalation is musky, earthy, pungent, and occasionally spicy. Blue Cheese strain, on the other hand, adds a new dimension to the flavor profile, with undertones of blueberry that appear to pop out even more when inhaled. It has hints of blueberry and earth to help balance out the cheesiness, which can be overpowering for some consumers.  The aftertaste is slightly acidic, similar to the tangy flavor of Parmesan or Gouda cheeses. The terpenes associated with this strain are Beta-Caryophyllene, Pinene, Limonene, and Humulene.

What is the Texture of Blue Cheese Strain?

The Blue Cheese strain has a delicate undertone of blue and purple along with pastel violet tints visible in the sugar leaves. Overall, the buds are heavily resin-coated, giving them a shiny and sweet appearance. Blue Cheese strain’s blooms are normally yellow or green, with dashes of golden orange pistils that are extremely curled and closely wrapped. Its leaves come in a vast spectrum of colors, ranging from deep green to deep purple, making the array of colors stands out even more. Overall, this is a strain that is as pleasing to the eye as it is to the palate.

According to the marijuana cultivators, the Blue Cheese strain is a relatively easy variety to grow. Because of its origins in the United Kingdom, this variety is inherently mold resistant, which is a bonus because Blue Cheese strains flourish best outside in cold regions. This strain, unlike some indica dominant hybrid, is rather short, with stems that expand far and wide. Due to its large leaf to calyx ratio, it has a brief flowering time of about 8-9 weeks, with an outdoor harvest session that takes place in late October. Indoor plants thrive in both watery states and soil, giving growers some flexibility.

In the cannabis market, blue cheese might be the height of flavor. This cultivar was created from some of the terpene-richest plants on the earth, and since then, it has been exploding taste receptors. Particularly among weed connoisseurs and strain seed collectors, blue cheese is not one to miss out on.

What is the THC and CBD Content of Blue Cheese Strain?

Tetrahydrocannabinol or THC levels in the Blue Cheese strain might soar as high as 20 percent. The strain average is stated to be 17.5 percent.  The Cannabinoid or CBD concentration of Blue Cheese has been reported to be variable. Some claim it doesn’t have any involvement of CBD, while others claim it has a CBD content of up to 2%. The high from this strain starts as a subtle, crawling sensation of relaxation that quickly turns into bliss all over your body.

Cannabis breeders are constantly pushing the envelope and trying to introduce novelties to the market. That particular way of thinking is what gave rise to Blue Cheese. While some breeders focus on taste, others strive for maximum THC levels and unique cannabinoid characteristics. Blue cheese is a result or outcome of the latter practice.

Blue Cheese strain’s popularity is soaring high with the strain sprouting up in pot shops and dispensaries of places as far-flung as California, Maine, and Colorado. According to the consumers, the Blue Cheese strain’s high potency quotient won’t knock you out like a tonne of bricks. Instead, it acts as a pleasant breeze, providing relief as well as a wide range of therapeutic possibilities. As you become more relaxed, the reduction in stress variables will appear swiftly.

There are no reviews yet. 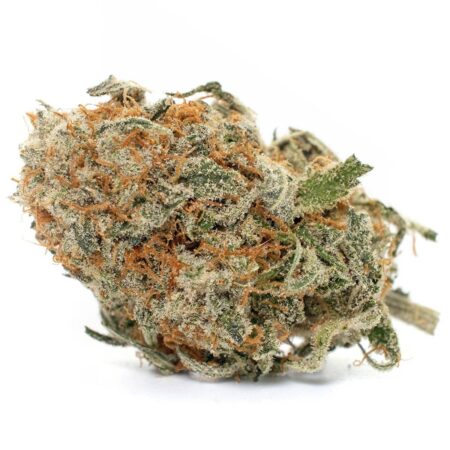