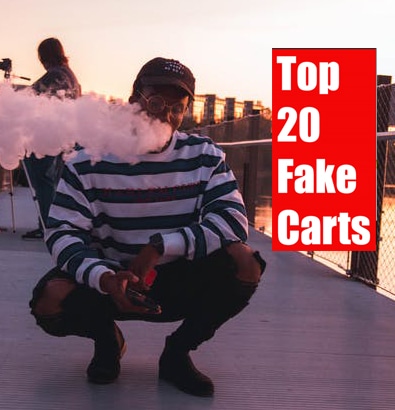 Vape carts hold immense popularity among cannabis lovers in the United States. People prefer having their favourite cannabis strains and weed through vape cartridges. Thus, the shops indulge in selling numerous carts, among which some are not authentic.

Fake carts are ruining the market, where numerous black market brands are selling fake brands by enticing customers with lower prices. Such fake cart brands compromise on the product quality that does more harm than good.

Some vape carts claimed to have THC content as high as 85%, but in reality, came out with a mere 18%. When tests were conducted at the black markets of Los Angeles, the data showed that 75% of the vape cartridges had numerous additives, out of which the thickening agent called vitamin E acetate was a part.

Their notorious activity will not stop until and unless the people of the United States catch them red-handed. Only when people reject their products, they will not have a chance to sustain themselves in the market with their fake carts.

Why Shouldn’t you buy fake carts?

Consumers may incur substantial consequences as a result of fake carts. It not only wastes your money but can also have negative health effects. After ingesting phoney carts, numerous users have reported experiencing breathing difficulties. Another problem with smoking fake carts is that you can get scarring in your lungs, which can turn into a lung infection.

In addition, fake carts may contain other harmful chemicals, which can lead to other infections in the body. Even though fatalities are uncommon, doctors advise against them since they can result in lung problems that, in some circumstances, can be fatal.

DHGate appears to be a Chinese website that emerges as the major reason behind the flow of fake carts into the United States. “Wholesale Atomizers” is the name for their product category that undertakes the moving of all fake cart brands.

Remember that many carts are empty when up for sale. You can fill it with your desired product and get the required sensation. Nevertheless, purchasing an authentic cart keeps you away from all the harmful substances and other perils that might cause your health to deteriorate.

The Top Fake cart brands to watch out for!

Figuring out the fake carts become difficult owing to their stark match with the real ones. Here it becomes necessary to know about them for the sake of your health and well-being. Worried about falling into the trap of fake cart brands?

Following are some of the fake carts that you must be aware of before making your next cannabis vape purchase;

TKO is one of the most authentic cart brands that gained immense popularity among the masses. The sales of this particular brand skyrocketed in the United States, leading to massive growth figures. The enticing statistics convinced the dupers to create a fake cart under the same name and continue the sale in the market.

Nevertheless, it got caught in the cannabis lover’s eye when the designs did not match. The authentic brand launched a new Vape cart design, while the fake carts continued with the older TKO extracts’ vape cart design. The difference helped the customers differentiate between the old and the new.

Cookies are one of the most influential and dominant names in the vape industry. Consequently, the term “Cookies” refer to the diverse strains of cannabis products available for consumption.

The popular and high-profile rapper named Berner joined hands with GPen to launch effective vape cartridges under the banner name “Cookies”. Later numerous notorious personalities launched fake carts under the same brand’s name that was believed to have crossed the authentic one in terms of sales figures.

Another popular vape cart brand that got replicated by fake producers is the West Coast Sure. The crown on top of the vape cart makes it distinct from the other brands, sparkling a different tint of flamboyance.

WCC management was the original company behind this vape cart, which started as a street brand and closed down due to high competition and licensure resilience.

Now they have an authentic CPDH production license as well as a distribution license. Thus, when you opt for its purchase, consider checking the license before paying the bills.

Dank is one of the fakest vape cart brands available in the market. The consumers of this product are bound to suffer from the side effects and pulsating health conditions. The vape carts are full of Vitamin E acetate and have no authenticity of the cannabis present inside.

Numerous researchers invested their time and hard work to find out details about the brand but to utter failure. Consuming this brand would open the doors for lung diseases without fail.

Another fake cart brand on this list is Dabwoods. While it has numerous names in the market like “Deepwoods”, “Dankwoods”, “Backwoods”, etc, all of them appear to be fake. The cannabis industry tried to dig out the authenticity of this brand but found nothing but a fake presence.

The brand is a hollow shell of a cannabis vape cartridge with only the packaging as an offering.

There was a lot of confusion regarding the authenticity of 710 Kingpen among vape lovers. The doubts concerned its license and authentic cannabis inclusions. The research helped in finding out that 710 Kingpen is a brainchild of the brand “Clean Cannabis Initiative LLC”.

Controversial situations sparked when some cannabis consumers complained the Vape carts had dirt inside.

Such disputes arise when fake brands circulate in the market. Provided you have any doubts about the 710 Kingpen vape cartridge you own, consider checking it on the Kingpen websites where QR code validation is available to check the authenticity of vape carts.

If the QR code shows inauthentic, you have come under the influence of a fake cart.

Often deemed as a brother of Dank, Cali Plug is another fake cart brand, that has nothing to offer but the packaging. Detailed research about the brand revealed their non-existence among authentic vape cart brands.

It has diverse names like “Cali Confidential”, “Cali Piff”, “Cali Cart”, etc, that are branches of the same tree.