Getting high is a fun activity. And to make it even more fun, you can try out a bunch of different things. These include playing games, listening to music, eating food, or doing all three at once!

Weed games are famous for increasing the high of Cannabis and making the whole act of consuming cannabis delightful.

There are a lot of weed games that you can choose from. Be it indoor games, card games, online games, etc. In this post, we have collated TOP EIGHT WEED GAMES for you to play.

So the next time you get high, let your creativity flow by playing these weed games. Let’s get started!

Weed games are a fun and exciting way to get everyone in the mood. These easy-to-play games are designed to make everyone higher. So sit back and relax, and enjoy playing these top eight weed games!

If you’re a tiny bit interested in Greek Mythology or have been keeping up with pop culture, you would surely know of Medusa. Well, even if you don’t it doesn’t matter because this game doesn’t require you to.

Medusa: The Weed Game is played by 3 or more people. Everyone sits in a circle and keeps their head down. Taking rounds, one player counts down to 3, and at the count of 3 everyone looks up and stares into the eyes of any player.

If the player one is staring at is also staring at them, then both shout Medusa and take a hit from the bong or the joint. If someone changes the player they were initially looking at, they get disqualified from the game!

Sounds interesting? Play this game at your next smoke session!

Never Have I Ever

Stoners are notorious for giving everything a Cannabis twist. The classic party game, ‘Never Have I Ever is no stranger to this.

For this game, you will need 3 or more people. One of you would ask a question, it could be a funny, embarrassing, or naughty question. E.g., Have you ever farted on a date? If someone has, then they take a hit from the bong or the joint.

The only rule that applies to this game is that you need to be honest with your answers and when you ask questions, you can not ask one that you know the answer to. Keep it fun, and keep the joint passing. 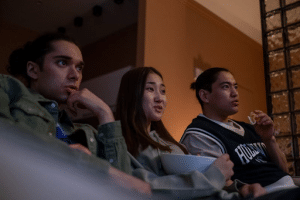 This is by far the best weed game that does not require much thinking or any preparation. You literally just need another person to play this game with. Two or more people can play Trip Taxi.

This game has straightforward rules, you take a hit from the bong, joint, or weed pen and you do not exhale the smoke. You pass the weed to the other person, and once they have completed taking their hit, you exhale. The other person does the same.

So when the weed gets passed to you, you finish inhaling and they exhale. This is an awesome way to get really high!

Lemon hit is a game straight out of childhood. Remember running those silly lemon-spoon races when you were a kid? This game is similar but with one twist. Instead of running sober, you run high!

Imagine how much fun it would’ve been to play that childhood game-high? Falling off, and stumbling would’ve been an immense source of laughter. Well, now you can try it out high.

Just get a spoon and a lemon (egg works too but considering you are high and it might fall off, you’re advised to not use it). Put the spoon in your mouth and place the lemon on it. Then count to 3 and run to the finish line.

Whoever comes first wins a prize. And the prize is up to you to decide!

The game is in the name. An extremely simple game that ensures everyone gets the weed faster!

Sit in a circle and play your favourite music, dim the lights and get ready for an amazing experience. One of you would light the joint and would take a puff, before taking a puff you need to say ‘puff’. Take two puffs like this and then pass the joint to the person sitting on the right.

While passing you have to say ‘pass’. You can’t smoke for more than 10 seconds in the first round and 15 in the next. Keep increasing the time as the rounds increase.

Well, we have told you about weed games that involve more than one person and cannabis. If you don’t have anyone around and you have already smoked up, then you can go back to good old video games.

We recommend playing video games that you used to play in your childhood and are good at, these include the GTA series of games, Angry Birds, Temple Run, Mario, etc.

Guess the song is a game that you can play alone too. You do not require more people, even though it’s more fun that way.

For this game, open your Spotify app and pick a playlist of any decade. Now hit the shuffle button. Before the lyrics to the song come, you need to guess it. If you’re right you need to take a puff, if you’re wrong everyone else gets a puff.

A merrier way to get high!

Life of high can be played with two or more people. By taking turns, you need to select a random incident or topic connecting to your life. The person whose turn it is will speak on that topic in a comedic way for 2 minutes.

If they’re able to do it, then they get 3 puffs of a joint, if they aren’t then everyone else gets one puff. This is an enjoyable way of refreshing old memories while laughing and having fun.